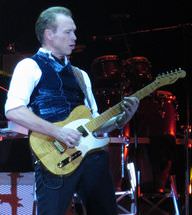 He is a British singer, songwriter and actor who is prominent for his membership with the English new wave band, "Spandau Ballet" where he has served as the principal songwriter, lead guitarist and backing vocalist.

Gary Kemp has been a pivotal member of the group as he is noted to have written the lyrics for the group’s hit songs including; "Only When You Leave", "True", "Through the Barricades", "Gold" and more.

His parents are father, Frank Kemp and mother, Eileen Kemp. His brother is English actor, director and musician, Martin Kemp. He was married to English actress, Sadie Frost between 1988 and 1995. His children are Milo, Rex, Kit and Finlay Kemp.

He received an award for “Outstanding Song Collection" at the 2012 Ivor Novello Awards.

He enjoys cycling and mountain walking.

Gary Kemp is a famous English singer-songwriter, guitarist, and actor, who was born on October 16, 1959. As a person born on this date, Gary Kemp is listed in our database as the 79th most popular celebrity for the day (October 16) and the 285th most popular for the year (1959).

People born on October 16 fall under the Zodiac sign of Libra, the Scales. Gary Kemp is the 2418th most popular Libra.

Aside from information specific to Gary Kemp's birthday, Gary Kemp is the 2476th most famous English.

In general, Gary Kemp ranks as the 31894th most popular famous person, and the 2901st most popular singer of all time. “The Famous Birthdays” catalogs over 25,000 famous people, everyone, from actors to actresses to singers to tiktok stars, from serial killers to chefs to scientists to youtubers and more. If you're curious to see who was born on your birthday, you can use our database to find out who, what, where, when and why. You can search by birthday, birthplace, claim to fame or any other information by typing in the search box, or simply browse our site by selecting the month, the day, the horoscope, or any other clickable option.