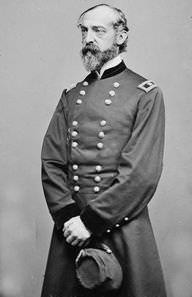 George Meade was commissioned into the United States Army in 1831 following his successful training at the academy. He initially joined the 3rd US Artillery as a second lieutenant, but left the army in 1836 to focus on his civil engineering career.

He rejoined the service six years later and would go on to fight in a number of wars including the Battle of Monterrey, and the Mexican–American War. He became a national hero in 1863 when he led the Army of the Potomac to defeat the General Robert E. Lee-led Confederate army. His heroism earned him many important positions during the Reconstruction era.

He was one of the children of Margaret Coats Butler and Richard Worsam Meade, who was a renowned art collector. He had ten other siblings which included army officer Richard Worsam Meade II. He married Margaretta Sergeant with whom he fathered seven kids including Margaret Butler Meade, George Meade, and John Sergeant Meade.

He had his training at the U.S. Military Academy.

As an engineer in the military, he helped to construct many lighthouses.

In the 1993 film titled “Gettysburg”, his character was played by American actor Richard Anderson.

George's birthday is in 89 days

George Meade would be 206 years old if he was alive today.

He was born in Cádiz, Spain.