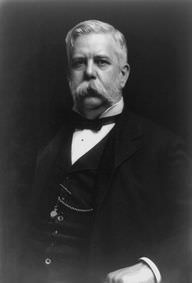 George Westinghouse was one of the greatest American inventors, engineers, and industrialists. He pioneered the adoption of AC (alternating current) for electricity distribution across the USA in the 1880s.

Westinghouse was of German descent but was born in Central Bridge, New York. However, at age 16, he joined “Company M” and served the USA during the Civil War as a corporal. He also joined the Navy during his years at war. The scientist returned to his family in August 1865 and later attended Union College.

He earned his first patent in late 1865 at only 19 years, when he invented the “rotary steam engine.” The scientist also devised the famous “Westinghouse Farm Engine.”

In 1867, he invented a “vehicle replacer,” which was a device that guided freight railroad vehicles back onto their tracks. His high interest in railroads led to his invention of a railroad air brake, which was patented in 1869. His invention has contributed to an effective braking system in modern trains and heavy vehicles.

With the aid of some American electrical engineers in the 1880s, Westinghouse developed a multiple-voltage AC generator and power system, which are widely used in modern America.

He earned over 100 patents and was a National Inventors Hall of Famer.

George Westinghouse's birthday is on October 6, 1846.

George's birthday is in 8 days

George Westinghouse would be 175 years old if he was alive today.

He was born in Central Bridge, New York, U.S..