Gerry Adams is an Irish politician known for being the president of the Irish republican political party Sinn Féin. He is also known for serving as the Member of Parliament for Belfast West on multiple occasions.

He was born to Anne Hannaway and renowned soldier Gerry Adams, Sr. In 1971, he got married to Collette McArdle, with whom he fathered a son named Gerry Adams, Jr.

In 2016, the U.S. Secret Service denied him entrance to the White House for the annual St Patrick's Day celebrations despite the fact that he received an invitation for the event.

In 2016, he sparked controversy after using the highly offensive word "n*****" in a tweet. He later apologized for using the insulting and contemptuous word.

In 2013, his brother Liam Adams was sentenced to 16 years imprisonment for sexually abusing his own daughter.

He sustained severe injuries during an attempt on his life in 1984. 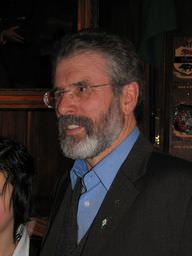 Title
Gerry Adams wearing the Easter Lily badge. The Easter Lily is a badge worn at Easter by Irish republicans as symbol of remembrance for Irish combatants who died during or were executed after the 1916 Easter Rising.
Author
Domer48 at English Wikipedia
Source
http://commons.wikimedia.org/wiki/File:Gerry_Adams_Easter_Lily_Badge.jpg
License
Public domain

Gerry Adams' birthday is in 1 day

Where is Gerry Adams from?

He was born in Belfast, Northern Ireland.