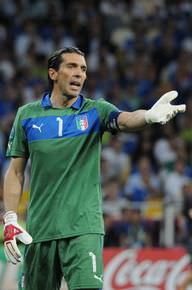 Italian professional goalkeeper, Gianluigi Buffon, is regarded as one of the most prolific goalkeepers of all time by the football fraternity. As of January 2020, he holds the record for the number of clean sheets in the Italian Serie A.

He was born to parents, Maria Stella and Adriano. His sisters, Veronica and Guendalina are retired professional volleyball players.

He married Alena Šeredová in 2011, and they have two sons named, Louis Thomas and David Lee. The couple divorced in 2014.

In 2016, he welcomed his son, Leopoldo Mattia with his partner, Ilaria D'Amico.

He won “The Best FIFA Goalkeeper” award in 2017

In 2006, he helped his national team, Italy, to win the FIFA World Cup in Germany.

He partnered the video game “World of Tanks” in May 2016.

Gianluigi's birthday is in 60 days

Where is Gianluigi from?

He was born in Carrara, Italy.

What is Gianluigi Buffon's height?

People born on January 28 fall under the Zodiac sign of Aquarius, the Water Bearer. Gianluigi Buffon is the 394th most popular Aquarius.

In general, Gianluigi Buffon ranks as the 5179th most popular famous person, and the 77th most popular soccer player of all time. “The Famous Birthdays” catalogs over 40,000 famous people, everyone, from actors to actresses to singers to tiktok stars, from serial killers to chefs to scientists to youtubers and more. If you're curious to see who was born on your birthday, you can use our database to find out who, what, where, when and why. You can search by birthday, birthplace, claim to fame or any other information by typing in the search box, or simply browse our site by selecting the month, the day, the horoscope, or any other clickable option.