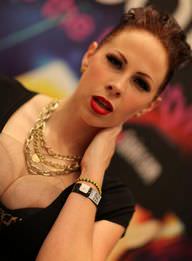 Gianna Michaels is an adult video star from the USA. She is one of the most famous persons in her field, she has appeared on more than 460 adult films and she has managed to win many important awards from 2007 to 2013, including 2007's “Star of Year”.

She firstly got into modeling because the fast food job was not paying well enough. Modeling led to nude modeling and eventually she ended up in the adult industry.

Gianna Michaels has appeared in the horror film "Piranha 3D", in "LOOK: The Series" and in the "Do Something" music video of the hip hop group named Dyme Def.

Gianna's birthday is in 244 days

Where is Gianna from?

She was born in Seattle, Washington, U.S..