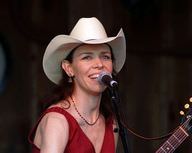 Gillian Welch is a highly experienced, multiple-Grammy award-winning singer and songwriter who originally gained popularity as a teenage singer-songwriter thanks to her remarkable voice and intelligence.

Having a great passion for the craft during her early days she became a huge admirer of bluegrass and early country music, particularly the works of the Stanley Brothers, Delmore Brothers, and Carter Family. Her career soared to greater fame and acclaim, mainly because of her effective collaboration with guitarist David Rawlings as well as the release of popular albums including "Revival," "Soul Journey," "The Harrow & the Harvest," and "Time (The Revelator)."

This lovable singer was born to Mitzie Welch and Ken Welch.

She is a degree holder in photography.

Her successful collaboration with David Rawlings gave birth to multiple successful albums, including "All the Good Times (Are Past & Gone)."

Gillian's birthday is in 49 days

Where is Gillian from?