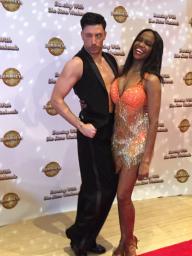 Taken this picture of Gio and Oti

He was romantically linked to Ashley Roberts.

He was partnered with radio and TV personality Michelle Visage in the 17th season of Strictly Come Dancing.

Giovanni Pernice's birthday is on September 5, 1990.

Giovanni's birthday is in 341 days

Where is Giovanni from?

He was born in Italy.

What is Giovanni Pernice's height?