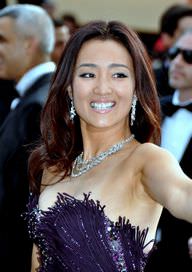 Gong Li is a Chinese actress. She made her film debut in 1987 after director Zhang Yimou discovered her while she was studying at the Beijing-based Central Academy of Drama. She has garnered international recognition through the films “Raise the Red Lantern” as Songlian, “Ju Dou” as the title character and “Farewell My Concubine” as Juxian.

She was born to an economics professor father and teacher mother who raised her in Jinan, Shandong. She dated Zhang Yimou. She is the ex-wife of Ooi Hoe Seong, a Singaporean entrepreneur. In 2019, she became the wife of Jean-Michel Jarre.

She has received many accolades including those from the Hong Kong Film Award, Golden Rooster Awards and Hundred Flowers Awards.

She has been a UNESCO Artist for Peace and an FAO Goodwill Ambassador.

Gong Li's birthday is in 85 days

Where is Gong Li from?

She was born in Shenyang, China.

What is Gong Li's height?