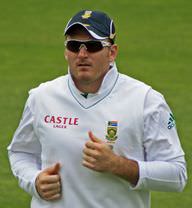 Title
Graeme Smith in the field for South Africa during a tour match against Somerset in 2012.
Author
Harrias
Source
http://commons.wikimedia.org/wiki/File:Graemesmith.jpg
License
CC BY-SA 3.0

Graeme Craig Smith is a well-accomplished former South African cricketer. He had an incredible career and is regarded by many cricket enthusiasts as amongst the greatest captains ever in test cricket.

He is of Scottish descent but was brought up in Johannesburg, South Africa. He attended the King Edward VII School for his primary and high school education.

He played for the South African cricket team at the Under 19 Cricket World Cup.

However, the cricketer also had some spells on the international stage. In England and Wales, he captained Somerset cricket club to win the 2005 Twenty 20 Cup trophy and captained the Surrey County Cricket Club during the 2013 season. He also played for Rajasthan Royals during the debut season of the Indian Premier League in 2008.

In 2003 and at age 22, he became the youngest person to captain South Africa’s national cricket team. He played over 100 test games for the country and led them to victory in 2005, at a series in the West Indies.

As of 2021, he remained the all-time successful cricket test captain with 53 test victories. 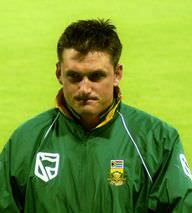 King of the United Kingdom and the British Dominions

Graeme's birthday is in 65 days

Where is Graeme from?

He was born in Johannesburg, Transvaal Province.

People born on February 1 fall under the Zodiac sign of Aquarius, the Water Bearer. Graeme Smith is the 1263rd most popular Aquarius.

In general, Graeme Smith ranks as the 17403rd most popular famous person, and the 35th most popular cricket player of all time. “The Famous Birthdays” catalogs over 40,000 famous people, everyone, from actors to actresses to singers to tiktok stars, from serial killers to chefs to scientists to youtubers and more. If you're curious to see who was born on your birthday, you can use our database to find out who, what, where, when and why. You can search by birthday, birthplace, claim to fame or any other information by typing in the search box, or simply browse our site by selecting the month, the day, the horoscope, or any other clickable option.