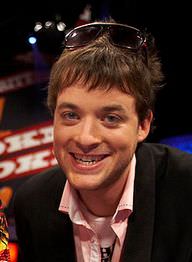 Title
Hamish Blake in an episode of Joker Poker in 2005.
Author
Source
http://commons.wikimedia.org/wiki/File:Hamish_Blake.jpg
License
CC BY 2.0

He is an Australian comedian, actor and author, who has been in the spotlight since 2003 – he is primarily known for his collaboration as a part of the comedy duo, "Hamish and Andy" alongside fellow comedian, Andy Lee.

The duo are noted to have had several radio, television and live performances, including their drive time show, Hamish & Andy.

In addition to that, Blake has also had several solo shows including the Melbourne International Comedy Festival's televised 2008 Great Debate.

His parents are father, Noel Blake and Kerry Blake. His siblings are Lachlan and Sophie Blake. He got married to Zoe Foster in 2012. He is a parent to Sonny and Rudy Blake.

He earned the "Most Popular Personality on TV" at the 2012 Logie Awards and was nominated for the same award the following year.

Blake was named the "Most Popular Personality on Australian Television" at the Gold Logie Awards.

He was nominated for the "Most Popular Presenter" at the 2012 and 2014 Silver Logie Awards.

He dropped out of University of Melbourne to chase his comedy career.

While growing, he was a member of the National Boys Choir of Australia.

One of the tattoos on his arm is a small anchor which symbolizes his trip on a tall ship to Tasmania. He also has a tattoo of two crossed drumsticks.

He married Zoe Foster on his 31st birthday date.

Hamish's birthday is in 206 days

Where is Hamish from?

He was born in Melbourne, Australia.

People born on December 11 fall under the Zodiac sign of Sagittarius, the Archer. Hamish Blake is the 1814th most popular Sagittarius.

Aside from information specific to Hamish Blake's birthday, Hamish Blake is the 455th most famous Australian and ranks 58th in famous people born in Melbourne, Australia.

In general, Hamish Blake ranks as the 25734th most popular famous person, and the 314th most popular comedian of all time. “The Famous Birthdays” catalogs over 40,000 famous people, everyone, from actors to actresses to singers to tiktok stars, from serial killers to chefs to scientists to youtubers and more. If you're curious to see who was born on your birthday, you can use our database to find out who, what, where, when and why. You can search by birthday, birthplace, claim to fame or any other information by typing in the search box, or simply browse our site by selecting the month, the day, the horoscope, or any other clickable option.