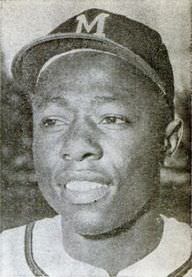 Hank Aaron was a legendary American professional baseball player. He was affectionately known by the nickname, "Hammer".

Hank Aaron grew up in a poor community with no organized baseball team at his high school. Because of his talent, he joined the Mobile Black Bears, which was a semipro team.

When he went professional, baseball was still segregated, so he joined the Negro American League. After success there, he eventually joined Major League Baseball, playing for the Milwaukee Braves.

Aaron had a great career, and at his prime, he hit 314 and 106 RBI. He holds several offensive records, and once held the most career home runs for 33 years.

Between 1953 and 1971 he was married to Barbara Lucas. Their union produced five children including, Dorinda and Gary. Two years after his divorce to Lucas, he tied the knot with Billye Williams, and together, they had a daughter named Ceci.

In 1976, the Milwaukee Brewers retired the number 44 jersey in his honor. And the Atlanta Braves did same in 1977.

He was honored by the NAACP with the Spingarn Medal. In 1982 he became a Baseball Hall of Famer. And six years later, he became an inductee of the Wisconsin Athletic Hall of Fame.

Growing up, he was greatly inspired by baseball icon, Jackie Robinson.

He studied at Central High School, where he played baseball.

The baseball legend was a vegetarian.

Failure is a part of success.Hank Aaron

I don't feel right unless I have a sport to play or at least a way to work up a sweat.Hank Aaron

I never smile when I have a bat in my hands. That's when you've got to be serious. When I get out on the field, nothing's a joke to me. I don't feel like I should walk around with a smile on my face.Hank Aaron

I'm hoping someday that some kid, black or white, will hit more home runs than myself. Whoever it is, I'd be pulling for him.Hank Aaron

My motto was always to keep swinging. Whether I was in a slump or feeling badly or having trouble off the field, the only thing to do was keep swinging.Hank Aaron

The thing I like about baseball is that it's one-on-one. You stand up there alone, and if you make a mistake, it's your mistake. If you hit a home run, it's your home run.Hank Aaron

The triple is the most exciting play in baseball. Home runs win a lot of games, but I never understood why fans are so obsessed with them.Hank Aaron

Hank Aaron's birthday is in 63 days

How old was Hank Aaron when he died?

Hank Aaron would be 87 years old if he was alive today.

Where was Hank Aaron from?

He was born in Mobile, Alabama, U.S..

Hank Aaron was a famous American baseball player, who was born on February 5, 1934. As a person born on this date, Hank Aaron is listed in our database as the 12th most popular celebrity for the day (February 5) and the 19th most popular for the year (1934).

People born on February 5 fall under the Zodiac sign of Aquarius, the Water Bearer. Hank Aaron is the 497th most popular Aquarius.

Aside from information specific to Hank Aaron's birthday, Hank Aaron is the 4081st most famous American and ranks 4th in famous people born in Mobile, Alabama, U.S.

In general, Hank Aaron ranks as the 6349th most popular famous person, and the 14th most popular baseball player of all time. “The Famous Birthdays” catalogs over 40,000 famous people, everyone, from actors to actresses to singers to tiktok stars, from serial killers to chefs to scientists to youtubers and more. If you're curious to see who was born on your birthday, you can use our database to find out who, what, where, when and why. You can search by birthday, birthplace, claim to fame or any other information by typing in the search box, or simply browse our site by selecting the month, the day, the horoscope, or any other clickable option.