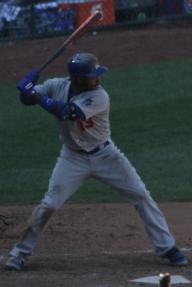 Hanley Ramirez impressive performance in his first MLB season earned him the National League’ “Rookie of the Year Award” in 2006. He was initially signed by the Boston Red Sox in 2000 at the age of 16 years. The Dominican baseball star spent the first five years of his professional career in other leagues where he starred for teams like the Augusta GreenJackets, and the Portland Sea Dogs.

After his debut season with the Red Sox, Ramirez was traded to the Miami Marlins. Later in his career, he played for other prominent teams like the Los Angeles Dodgers, and the Cleveland Indians.

He was born to Isabela and Toribio Ramírez. He has been married to Sanoe.

Ramirez was regarded as a top talent when he was a student of Adventista High School.

He featured in three All-Star games before retiring from the sport. In 2008 and 2009 he received the Silver Slugger Award.

Admired for his versatility, this baseball icon played in a number of positions including left field, shortstop, and first base.

His United States citizenship was confirmed in 2019.

How much is Hanley Ramirez’s Net Worth?

Hanley Ramirez's birthday is in 19 days

Where is Hanley Ramirez from?

He was born in Samaná, Dominican Republic.