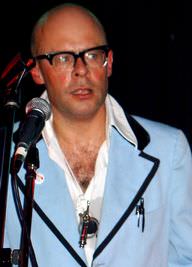 Harry Hill initially worked as a doctor before downing his tools to pursue a career as a stand-up comedian. He shot to fame with his radio show titled “Harry Hill's Fruit Corner” which started running in 1993. The show featured performers like Burt Kwouk and Al Murray.

His popularity increased the following year when he appeared on BBC Two’s “Fruit Fancies”. Known for his energetic performances, the English comedian has been spotted on many television shows such as “Harry Hill's TV Burp” and “Harry Hill's Tea Time”. In 2010, he unveiled his first comedy compilation titled “Funny Times”.

Hill is also known to be a prolific writer. He published his first novel in 2002 which was dubbed “Flight From Deathrow”. He has gone on to launch many literatures with some titled “Tim the Tiny Horse” and “The Further Adventures of the Queen Mum”.

He has further been used in commercials for many brands including Branston Pickle, and Boots.

His original name is Matthew Keith Hall. His children with Magda Archer are Frederica Aster, Kitty Clover, and Winifred Millicent.

Before starting his education at St George's Hospital Medical School, he attended Cranbrook School, and Angley School. He later attended the University of London where he obtained his medical degree.

He won two BAFTA awards in 2008. The following year, he received a couple of British Comedy Awards.

The Observer named him among their list of “fifty funniest acts in British comedy”.

Harry's birthday is in 253 days

He was born in Woking, Surrey, England, UK.

Harry Hill is a famous English comedian, actor, and author, who was born on October 1, 1964. As a person born on this date, Harry Hill is listed in our database as the 64th most popular celebrity for the day (October 1) and the 191st most popular for the year (1964).

People born on October 1 fall under the Zodiac sign of Libra, the Scales. Harry Hill is the 1695th most popular Libra.

Aside from information specific to Harry Hill's birthday, Harry Hill is the 1889th most famous English and ranks 2nd in famous people born in Woking, Surrey, England, UK.

In general, Harry Hill ranks as the 20362nd most popular famous person, and the 242nd most popular comedian of all time. “The Famous Birthdays” catalogs over 40,000 famous people, everyone, from actors to actresses to singers to tiktok stars, from serial killers to chefs to scientists to youtubers and more. If you're curious to see who was born on your birthday, you can use our database to find out who, what, where, when and why. You can search by birthday, birthplace, claim to fame or any other information by typing in the search box, or simply browse our site by selecting the month, the day, the horoscope, or any other clickable option.