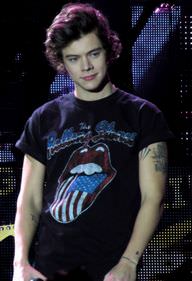 Harry Styles is a popular English singer and songwriter. He is most famous for being a member of One Direction - a boy band that he formed in 2010, together with Liam Payne, Louis Tomlinson, Zayn Malik, and Niall Horan. He is also known for the 2017 television series “Harry Styles at the BBC” in which he stars as himself.

He briefly dated the late English TV and radio host Caroline Flack. In 2018, he had a relationship with Camille Rowe, a renowned model.

While still in school, Harry Styles was the lead vocalist for a band called White Eskimo. Later, in 2010, he went on the British reality TV music competition series “The X Factor”. With some guidance, Styles and four others involved in the competition formed One Direction, and they got third place on the show. The band has since released several successful albums which include "Up All Night", "Take Me Home", "Midnight Memories", and "Four".

He also hosted five episodes of the television series “Saturday Night Life” between 2012 and 2019 as well performed as a guest musician and also guest hosted two episodes of “The Late Late Show with James Corden”.

He appears in the 2022 film, “Don’t Worry Darling '' directed by Olivia Wilde as Jack Chambers and stars together with Florence Pugh and Chris Pine. He also plays the role of Tom Burgess in “My Policeman”.

The musician is also the recipient of three BMI London Awards for being the co-writer of the band’s compositions.

In 2017, he received the ARIA Award for “Best International Artist” for his self-titled album.

Harry's birthday is in 61 days

He was born in Redditch, UK.