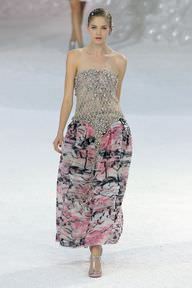 American fashion model Heidi Mount was 12 years old when she got discovered by a modelling scout. She landed a contract with Ford Models and started working in the industry in the early 2000s.

In 2004, she appeared in her first international campaign, the Spring 2004 collection of Japanese designer Yohji Yamamoto. She has walked the runway for luxury fashion brands such as Valentino, Michael Kors, Versace and Bottega Veneta.

She is the daughter of Clark and Jennifer Mount. She was raised along with four siblings. She was the wife of a hairstylist named Shawn Mount from 2007 to 2013. They had one son together. She gave birth to a daughter in 2017.

She has been featured in a host of international magazines including Vogue, Marie Claire, Vanity Fair, Harper’s Bazaar and W Magazine.

Heidi's birthday is in 188 days

Where is Heidi from?

She was born in Salt Lake City, U.S..

What is Heidi Mount's height?