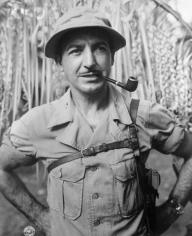 Recipient of the Purple Heart medal

After completing his military training, Henry Mucci was given the mandate to lead the 98th Field Artillery Battalion in 1943. As the commander, he reduced the number of officers and changed the unit to Rangers. He became a national hero two years later when he led an operation which rescued over 500 people from the Cabanatuan Prison Camp during the Bataan Death March.

His parents migrated from Italy. The army officer raised three children with his wife Marion Fountain.

He had his training at the West Point-based United States Military Academy.

Mucci’s bravery earned him many accolades including the Distinguished Service Cross, the Legion of Merit, and the Purple Heart.

His adventures were depicted in the John Dahl-directed movie titled “The Great Raid”.

In 1946, he unsuccessfully contested for a seat in Congress.

After his military service, he worked with Bridgeport Lincoln Mercury.

A part of Route 25 has been named after this ex-military officer.

During the Second World War, he participated in conflicts like the Battle of Pearl Harbor, and the Second Battle of the Philippines.

Henry's birthday is in 93 days

Henry Mucci would be 111 years old if he was alive today.

He was born in Bridgeport, Connecticut, U.S..