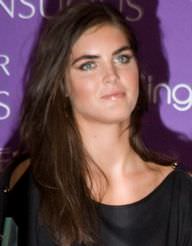 Born in Chevy Chase, Maryland, Hilary Hollis Rhoda, an American supermodel, is most recognized for her works with the brand company, Estée Lauder and other fashion companies.

Hilary attended the Academy of the Holy Cross in Maryland, where she played field hockey and basketball teams.

At school, she joined the Washington Catholic Athletic Conference championship team. She received an award for best offensive player and honors.

In 2013, she got engaged and later got married in 2015 to former National Hockey League player Sean Avery. The couple gave birth to their first son, Nash Hollis Avery, in 2020.

Hilary began her modeling career with ProScout and that is when her career grew as she got more gigs working on ads for Hollister, Abercrombie, and other firms. She later worked with Click Model Management and went international when she joined the IMG Models.

She has been represented by IMG Models in New York.

At the 50th Anniversary of Embrace Hope Necklace, Hilary modeled with the Hope Diamond. She also modeled at the 2012 Victoria's Secret Fashion Show.

In the 2013 annual Forbes ranking, Hilary Rhoda was ranked sixth among the world's highest-paid models.

Hilary's birthday is in 189 days

Where is Hilary from?

She was born in Chevy Chase, Maryland, U.S..

What is Hilary Rhoda's height?