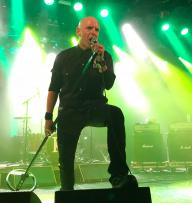 Dillon is an award-winning actor and musician who gained international prominence as a key member of the rock band, Headstones. He mostly performs as the group's lead vocalist, beside Trent Carr, Tim White, and Trent Carr. He helped the band to record its first studio album, "Picture of Health", which was later certified Platinum in Canada.

As an actor, it is recorded that he picked up his first significant acting role in 1994 in a drama film titled "Dance Me Outside", where he was cast as Clarence Gaskill.

His role in "Flashpoint" birthed him the "Best Performance by an Actor in a Continuing Leading Dramatic Role" at the 2014 Canadian Screen Awards.

He was bestowed the "Canada First Award" at the 2016 Lakeshorts International Short Film Festival for his appearance in the movie titled "The Offer".

At the Gemini Awards, his performance in "Durham County" earned him a nomination for the "Best Performance by an Actor in a Continuing Leading Dramatic Role" in 2011. He was also nominated for the same category in 2008 and 2009 for casting is "Durham County" and "Flashpoint" respectively.

Hugh's birthday is in 244 days

Where is Hugh from?

He was born in Kingston, Ontario, Canada.