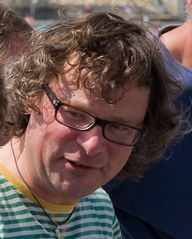 Hugh Fearnley-Whittingstall is a popular celebrity chef who is widely known in the United Kingdom as the host of the television series entitled “River Cottage”. He started his career when he returned to his native country, England, to work at London’s River Café as a sous chef.

He started gaining fame in 1995 after he was featured in his first television show dubbed “A Cook on the Wild Side”.  Four years later, he premiered “Escape to River Cottage” which was the maiden edition of his popular TV series “River Cottage”.

Aside from his television works, he has also published many books. His most popular ones include “The River Cottage Fish Book” and “Cuisine Bon Marché”. He has contributed to other newspaper companies like The Observer, and The Guardian.

He also played a key part in developing Hall & Woodhouse’s ale known as Stinger. He has worked with other charity organizations such as Fauna and Flora International.

He spent his childhood with his parents Jane Margaret, a gardener, and Robert Fearnley-Whittingstall. He tied the knot with Marie Derome in 2001, and as of October 2021, they had four kids.

He studied psychology and philosophy at St Peter's College, Oxford. Prior to that, he attended schools like Eton College, and Summer Fields School.

He initially thought of pursuing a career as a wildlife officer during his days in Africa.

While working as a sous chef, he occasionally worked as a freelance journalist.

Hugh Fearnley-Whittingstall's birthday is on January 14, 1965.

Hugh's birthday is in 358 days

Where is Hugh from?

He was born in Hampstead, London, UK.

People born on January 14 fall under the Zodiac sign of Capricorn, the Sea Goat. Hugh Fearnley-Whittingstall is the 1402nd most popular Capricorn.

In general, Hugh Fearnley-Whittingstall ranks as the 18979th most popular famous person, and the 32nd most popular chef of all time. “The Famous Birthdays” catalogs over 40,000 famous people, everyone, from actors to actresses to singers to tiktok stars, from serial killers to chefs to scientists to youtubers and more. If you're curious to see who was born on your birthday, you can use our database to find out who, what, where, when and why. You can search by birthday, birthplace, claim to fame or any other information by typing in the search box, or simply browse our site by selecting the month, the day, the horoscope, or any other clickable option.