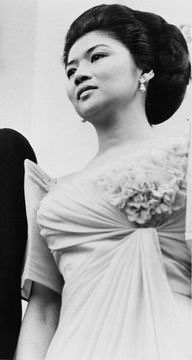 Imelda Marcos is a Filipino politician best known as the widow of dictator and the 10th President of the Philippine, Ferdinand Marcos. She was the First Lady of the Philippines during her late husband's dictatorship rule from 1965 to 1986.

She married Ferdinand Marcos in 1954 and bore him three children: Imee, Ferdinand Jr. and Irene. The couple adopted a fourth child named Aimee.

During her tenure as First Lady of the Philippines, she allegedly owned properties worth over $10 billion.

She once spent over $2000 on chewing gum while waiting for her flight at the San Francisco International Airport.

As First Lady, she once forced a plane to turn around in mid-air so she could go back and buy cheese in Rome.

She allegedly owns several bank accounts in Switzerland under the name “Jane Ryan”.

In her younger years, she worked as a singer, model and beauty queen.

In 2012, she was named the second-richest politician in her country behind iconic boxer Manny Pacquiao.

As First Lady of the Philippines, she gained worldwide notoriety for her excessive spending habits, which included frequently going on shopping sprees abroad.

She owned over a thousand pairs of shoes, some of which are now kept in the National Museum of the Philippines. 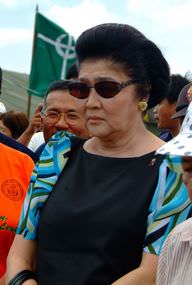 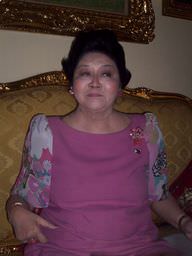 Ferdinand was a gold trader. He was a lawyer for mining companies. When he entered politics in l949, he had tons and tons of gold. When Bill Gates was a college dropout, Ferdinand already possessed billions of dollars and tons of gold. It wasn't stolen.Imelda Marcos

Filipinos don't wallow in what is miserable and ugly. They recycle the bad into things of beauty.Imelda Marcos

Filipinos want beauty. I have to look beautiful so that the poor Filipinos will have a star to look at from their slums.Imelda Marcos

I always say you can never be extravagant with beauty. Beauty is God made real. Beauty is life.Imelda Marcos

I beg Osama to stop warring. He is a Muslim, and Islam means peace. Nobody wins in a war... I wish I were tapped in the problem about Iraq. I knew Saddam enough that I could have talked him into surrendering. But it's too late.Imelda Marcos

I did not have three thousand pairs of shoes, I had one thousand and sixty.Imelda Marcos

I have never been a material girl. My father always told me never to love anything that cannot love you back.Imelda Marcos

I love everybody. One of the great things about me is that I have a very positive attitude.Imelda Marcos

I really had no great love for shoes. I was a working First Lady I was always in canvas shoes. I did nurture the shoes industry of the Philippines, and so every time there was a shoe fair, I would receive a pair of shoes as a token of gratitude.Imelda Marcos

I will come up with a project that will wipe out poverty in the Philippines in two years. I want to remove the people from economic crisis by using the Marcos wealth. Long after I'm gone, people will remember me for building them homes and roads and hospitals and giving them food.Imelda Marcos

It is shallow people who think beauty is frivolous or excessive. If you are bringing beauty and god, you are enriching the country. Rice feeds the body, books feed the mind, beauty feeds the soul. It is one thing I can really be proud of and stand tall in the world.Imelda Marcos

Life is not a matter of place, things or comfort rather, it concerns the basic human rights of family, country, justice and human dignity.Imelda Marcos

My dreams have become puny with the reality my life has become.Imelda Marcos

My dreams were always small and puny. All I ever needed was a little house with a little picket fence by the sea. Little did I know that I would live in Malacanang Palace for 20 years and visit all the major palaces of mankind. And then also meet ordinary citizens and the leaders of superpowers.Imelda Marcos

Never dress down for the poor. They won't respect you for it. They want their First Lady to look like a million dollars.Imelda Marcos

The only rich person is a person who is rich in spirit. I have no money deposit. I have only beauty deposit.Imelda Marcos

The Philippines is a terrible name, coming from Spain. Phillip II was the father of the inquisition, who I believe died of syphilis. It is my great regret that we didn't change the name of our country.Imelda Marcos

The problem of the world today is the people talk on and on about democracy, freedom, justice. But I don't give a damn about democracy if I am worried about survival.Imelda Marcos

They went into my closets looking for skeletons, but thank God, all they found were shoes, beautiful shoes.Imelda Marcos

When they see me holding fish, they can see that I am comfortable with kings as well as with paupers.Imelda Marcos

Imelda's birthday is in 154 days

Where is Imelda from?

She was born in Manila, Philippines.

People born on July 2 fall under the Zodiac sign of Cancer, the Crab. Imelda Marcos is the 776th most popular Cancer.

Aside from information specific to Imelda Marcos' birthday, Imelda Marcos is the 24th most famous Filipino and ranks 8th in famous people born in Manila, Philippines.

In general, Imelda Marcos ranks as the 8516th most popular famous person, and the 54th most popular family member of all time. “The Famous Birthdays” catalogs over 40,000 famous people, everyone, from actors to actresses to singers to tiktok stars, from serial killers to chefs to scientists to youtubers and more. If you're curious to see who was born on your birthday, you can use our database to find out who, what, where, when and why. You can search by birthday, birthplace, claim to fame or any other information by typing in the search box, or simply browse our site by selecting the month, the day, the horoscope, or any other clickable option.