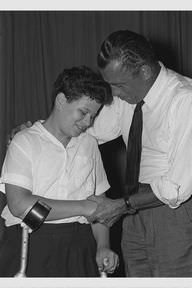 Itzhak Perlman is one of the world’s most acclaimed and talented violinists, music teachers, and conductors, he is of Israeli-American descent. He is revered by audiences all around the world for his extensive musical knowledge and talents.

Perlman has played all around the world, notably at President Barack Obama's inauguration. Perlman has been passionate about music since he was three years old, and after being refused admittance to Shulamit Conservatory because he was too young to grasp a violin, he taught himself how to play a toy violin.

He went on to study at the Academy of Music and the Juilliard School, where he won the Leventritt Competition in 1964, launching his international career. Since then, the Israeli-American performer has been a performer at a number of major music festivals all over the world. He is also known for teaching music to children.

He is an offspring of Chaim Perlman, and Shoshana Perlman.

He is of Polish and Jewish descent.

Itzhak's birthday is in 330 days

Where is Itzhak from?