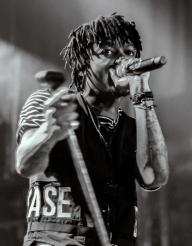 His first mixtape titled Cakewalk was released in 2010, prior to which he became part of the Spillage Village together with Hollywood JB, JordxnBryant, and Earthgang.

His independent projects including, Route of Evil, Para Tu and DiCaprio won him widespread recognition.

He signed a record deal with J.Cole’s Dreamville records in February 2017 and released his debut album, The Never Story a month later, to the admiration of many.

He featured on XXL’s 2018 Freshman Class.

He was born to father Carl Louis Route, Jr. and mother, Kathy Jean Route. He grew up with seven siblings and happened to be the youngest.

His stage name is a reference to his grandmother labeling him as jittery.

He worked as a pizza delivery guy to fund his music career.

People born on March 31 fall under the Zodiac sign of Aries, the Ram. J.I.D (Destin Choice Route) is the 848th most popular Aries.

In general, J.I.D (Destin Choice Route) ranks as the 10471st most popular famous person, and the 401st most popular rapper of all time. “The Famous Birthdays” catalogs over 25,000 famous people, everyone, from actors to actresses to singers to tiktok stars, from serial killers to chefs to scientists to youtubers and more. If you're curious to see who was born on your birthday, you can use our database to find out who, what, where, when and why. You can search by birthday, birthplace, claim to fame or any other information by typing in the search box, or simply browse our site by selecting the month, the day, the horoscope, or any other clickable option.