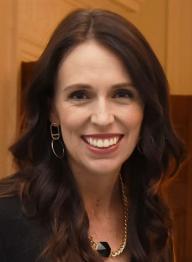 This file has been extracted from another file: Patsy Reddy and Jacinda Ardern.jpg

Jacinda K. Laurell Ardern is a New Zealand politician who began serving as the 40th Prime Minister of her country in October 2017 and as the leader of the Labor Party since August 2017.

She was born to Ross Ardern, a police officer and Laurell Ardern, a school catering assistant.

She announced her engagement to TV presenter and model, Clarke Gayford in May 2019. She gave birth to her first child, a daughter named Neve Te Aroha in June 2018.

She was elected as an MP to the House of Representatives during the 2008 general elections.

In 2008, Ardern became the President of the International Union of Socialist Youth.

On assuming office, she became the youngest female head of government in the world at the age of 37.

Forbes Magazine ranked her 38th among their 2019 list of “100 most powerful women in the world”.

She first worked at a local fish-and-chip shop while in College.

She previously owned a cat known as Paddles, who had a Twitter account dedicated to it. Paddles, however, died in a car accident in 2017.

People born on July 26 fall under the Zodiac sign of Leo, the Lion. Jacinda Ardern is the 1357th most popular Leo.

In general, Jacinda Ardern ranks as the 12354th most popular famous person, and the 126th most popular politician of all time. “The Famous Birthdays” catalogs over 25,000 famous people, everyone, from actors to actresses to singers to tiktok stars, from serial killers to chefs to scientists to youtubers and more. If you're curious to see who was born on your birthday, you can use our database to find out who, what, where, when and why. You can search by birthday, birthplace, claim to fame or any other information by typing in the search box, or simply browse our site by selecting the month, the day, the horoscope, or any other clickable option.