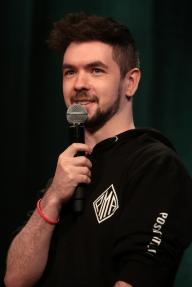 PewDiePie mentioned him in a 2013 video, giving him a push to popularity from a meager 2,500 subscribers to 15,000 subscribers within four days.

He hosted the Level Up! Games panel together with Strawburry17 at the D3 Expo in 2017.

He grew up with four older siblings – two brothers, Simon and Malcom, and sisters, Susan and Allison.

He broke up with vlogger Signe Hansen, popularly known as Wiishu, and announced in 2019 that he had begun dating YouTuber, Evelien Smolders.

His YouTube channel has been listed as the most watched in Ireland, boasting of over 23 million subscribers and more than 11 billion views as of December 2019.

He has hosted several charity live streams, raising over $2 million as of June 2019.

His nickname was adopted first from his mother who often called him Jack, and from a childhood friend who added ‘Septic Eye’ to Jack, after he got infected in the eye during an accident in a football match.

Jacksepticeye's birthday is on February 7, 1990.

Jacksepticeye's birthday is in 7 days

Where is Jacksepticeye from?

He was born in Ballycumber, Ireland.