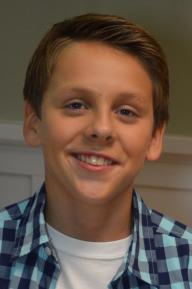 Title
www.redcarpetreporttv.com Mingle Media TV and Red Carpet Report host Tamara Krinsky were invited by Disney XD to visit the set of the new live-action and animation comedy "Kirby Buckets” which follows the adventures of a young animator. This new series is directed by Hal Sparks and will premiere on MONDAY, OCTOBER 20 (8:00 p.m., ET/PT) and stars Jacob Bertrand ("Marvin Marvin," "Bubble Guppies”). Get the Story from the Red Carpet Report Team, follow us on Twitter and Facebook at: twitter.com/TheRedCarpetTV www.facebook.com/RedCarpetReportTV www.redcarpetreporttv.com www.youtube.com/MingleMediaTVNetwork About "Kirby Buckets" "Kirby Buckets" introduces viewers to the vivid imagination of charismatic 13-year-old Kirby Buckets, who dreams of becoming a famous animator like his idol, Mac MacCallister. With his two best friends, Fish and Eli, by his side, Kirby navigates his eccentric town of Forest Hills where the trio usually find themselves trying to get out of a predicament before Kirby's sister, Dawn, and her best friend, Belinda, catch them. Along the way, Kirby is joined by his animated characters, each with their own vibrant personality that only he and viewers can see. "Kirby Buckets" was created by Gabe Snyder & Mike Alber ("Supah Ninjas") and is executive produced by Kristofor Brown ("Beavis and Butt-head"). It's a production of Horizon Productions, Inc. with animation by Titmouse, Inc. and carries a TV-Y7 parental guideline. Play the New “Kirby Buckets” Game on DisneyXD.com "Kirby Buckets: Scrawl and Brawl” is a new game where players can create their own character to battle enemies and complete quests while drawing items to help them through each level of the game. Watch the Series Premiere on the DisneyXD App The series premiere episode of "Kirby Buckets" is available to verified users on WATCHDisneyXD.com and the WATCH Disney XD app for smartphones and tablets. A free preview of the series premiere episode will also be available for download on iTunes starting October 13th. Be s
Author
Red Carpet Report on Mingle Media TV
Source
https://en.wikipedia.org/wiki/File:Jacob_Bertrand_on_Red_Carpet_Report_(cropped).jpg
Credit
https://www.flickr.com/photos/minglemediatv/15558044385/
License
CC BY-SA 2.0

Jacob Bertrand is a talented American actor, a voice-over artiste and an online personality. He began acting professionally in 2009 in the movie titled “Duress”. He is best known for featuring in the Disney series called “Kirby Buckets” and also starring as Jack Malloy in the Disney movie titled “The Swap”.

Bertrand has starred in several television series and movies such as “Marvin Marvin”, “Jinxed” and “Neckpee Island”.

He is also active on Twitter with the handle jb_mixmatch.

Jacob's birthday is in 158 days

Where is Jacob from?