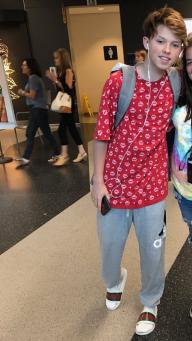 Jacob Sartorius is an American Social media Star and pop singer who first rose to international stardom posting short videos of himself on the popular video application Vine. As a singer, he released a cover version of John Legend's 2013 hit single All of Me. His debut single titled Sweatshirt was released in May 2016 on iTunes.

In August 2014, he uploaded his first video on Vine. In that video, he strongly spoke out against bullying. By 2015, he began rapidly growing his popularity on Vine and the online video community muscal.ly, where he respectively posted videos of himself joking and videos of himself lip-syncing popular songs. By so doing, he began amassing millions of followers on social media. His popularity was given a further boost with his association and friendship with fellow Vine star Cameron Dallas, with whom he co-headlined the popular MAGCON (Meet and Greet Convention) tour along with other popular Vine stars. By mid 2016, he had accumulated almost 4 millions followers on Instagram and over 6 millions followers on Musical.ly, thereby making him one of the biggest teenage internet personalities in the world.

His full name is Rolf Jacob Sartorius. He was born and bred in Virginia. He has an older sister who goes by the name Caroline.

Since his ascent to fame, he has found himself embroiled in a number of controversies, most notably the stories which surfaced in early 2016 that he allegedly sent out numerous inappropriate messages to his female fans pressuring them to send him nude pictures of themselves. One of his alleged victims, a young female Twitter user @luhsrupp, posted on Twitter a number of screenshots of the conversation she allegedly had with him in January 2016. According to the screenshots, Jacob tells the girl he would be annoyed if she didn’t send him photos of herself unclothed. The screenshots went viral moments after they were posted on Twitter and resulted in him being slammed from all angles. His representatives later refuted the allegations.

Besides being accused of sending inappropriate messages to fans, he has also been accused of being rude and disrespectful to his fans. A teenage Magcon fan named Kaitlyn accused him of body shaming her when she met him at a meet-and-greet in 2016. According to her, when she went to meet him, he looked at her up and down in disgust at her size. She demanded an apology from him via a post on Twitter.He never apologized to her.

Rumors began circulating on social media that he had had a falling out with friend and fellow Vine star Cameron Dallas after he suddenly left the MAGCON (Meet and Greet Convention) tour in 2016 before its completion. According to the rumors, Dallas kicked him off the tour for being rude and disrespectful to fans.

He is mainly popular among teenage girls.

He stated in a 2016 interview with J-14 that singer Ariana Grande was his celebrity crush because "she's such a cutie!" In that same interview, he revealed that in real life, he would focus on a girl's personality before going out with her. According to him, a girl's personality always comes first with regard to dating.

He was a victim of bullying when he was in the seventh grade.

He stated in an interview that his musical heroes include singers Ariana Grande and Selena Gomez. He has also mentioned singer and rapper Bryson Tiller as an artist he looked up to.

He is an animal lover, whose favorite pets include cats.

He and his father both share the name "Rolf".
He stated in an interview that he would love to have a career just like that of Justin Bieber's. According to him, Bieber's determination to succeed is one of the things he admires most about him.

Despite standing up for victims of bullying and speaking out against bullies, he has been accused by some fans of being a bully himself. 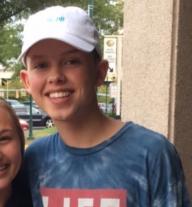 Jacob's birthday is in 309 days

Where is Jacob from?

He was born in Virginia, U.S..

People born on October 2 fall under the Zodiac sign of Libra, the Scales. Jacob Sartorius is the 3rd most popular Libra.

In general, Jacob Sartorius ranks as the 13th most popular famous person, and the 1st most popular internet personality / social media star of all time. “The Famous Birthdays” catalogs over 40,000 famous people, everyone, from actors to actresses to singers to tiktok stars, from serial killers to chefs to scientists to youtubers and more. If you're curious to see who was born on your birthday, you can use our database to find out who, what, where, when and why. You can search by birthday, birthplace, claim to fame or any other information by typing in the search box, or simply browse our site by selecting the month, the day, the horoscope, or any other clickable option.