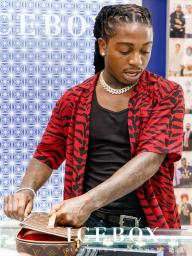 Rodriquez Jacquees Broadnax, known professionally as Jacquees, is an American singer and songwriter who is associated with the R&B music genre.

He became known for his single, B.E.D., which was released under the Cash Money Records label. He has also had song collaborations with big names in the American music industry such as Chris Brown, Trey Songz, T.I., Donell Jones, Jermaine Dupri and Wale.

He grew up with his sisters and brothers in Atlanta.

Jacquees earned an iHeartRadio Music Award nomination for R&B Song of the Year in 2018 for the single, B.E.D. The single also received a Platinum certification from the Recording Industry Association of America on February 26, 2018.

Jacquees’ other notable singles include Feel It, Inside, Your Peace, Hot for Me, Verify and Nasty.

Jacquees' birthday is in 70 days

Where is Jacquees from?

He was born in Decatur, Georgia, U.S..