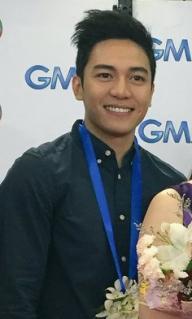 Jan Rommel Osuna Roberto, known popularly as Jak Roberto, is a Filipino singer, actor and model. He started out as a co-host of the television variety show, Walang Tulugan with the Master Showman before he earned small roles as an actor in television series such as Pepito Manaloto: Ang Tunay na Kuwento, Cielo de Angelina, Ilustrado and With a Smile.

In 2015, he became a member of the Filipino boyband, 3logy which was signed to GMA Records. They disbanded a year later after releasing the single, Maybe It’s You Pwede Ba?

He is the brother of Filipina actress, Sanya Lopez. The two have appeared together on the Philippine television drama series, The Half Sisters.

In 2019, he starred as Eugene Bitao in the drama series, Wagas Presents: Wait Lang… Is This Love?

Jak Roberto's birthday is in 107 days

Where is Jak Roberto from?

He was born in Nagcarlan, Laguna, Philippines.

What is Jak Roberto's height?