James Charles is an American social-media star and make-up artists whose videos tend to focus on beauty. His internet fame has made him a multi-millionaire and led to him working with entities such as CoverGirl and Iggy Azalea.

He became CoverGirl’s first-ever ambassador who was not a female in 2016.

He had garnered over 16 million YouTube subscribers within less than four years of registering on the service.

He handled the makeup responsibilities for Iggy Azalea’s “Sally Walker” music video in 2019.

He is recognized as a homosexual but has also expressed appreciation for the beauty of women.

In mid-2019 his beef with another popular YouTuber, Tati Westbrook, resulted in his channel setting the unenviable record of losing the most subscribers within a 24-hour period, in which over a million people unsubscribed. 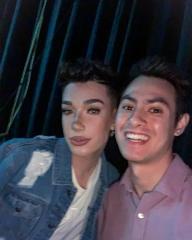 James' birthday is in 322 days