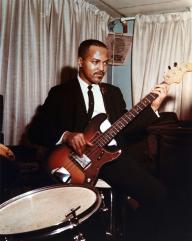 James was an American musician who played the bass and worked as the bassist. He worked on a lot of Motown Records releases.

James Lee Jamerson had a family that was deep rooted in music. His auntie sang in the choir and his grandmother played the piano. Being raised by his grandmother for a period of time, he became interested in the piano. As he grew up, he started playing the piano to audiences. He started playing the bass when he moved in with his mother. Later, Wayne State University offered him a music scholarship but he turned it down. Not long after completing high school, he made Annie Wells his wife.

He started sharing his gift of music in clubs in Detroit. In 1959, he started working with Berry Gordy. After that, he joined a group of musicians called “The Funk Brothers”. They worked together on a lot of productions by Motown Records. He has worked on a lot of different tracks including “Steve Wonder’s “I Was Made to Love Her”, “I Heard It Through the Grapevine” by Glady’s Knight & the Pips and “For Once In My Life” by Stevie Wonder.

Starting from 1963, it is believed that he worked on over sixty singles that made it to the top of the charts from Motown Records within a few years.

In 1983 after struggling with alcohol addiction, he died from heart failure, cirrhosis of the liver and pneumonia.

James' birthday is in 360 days

James Jamerson would be 87 years old if he was alive today.

He was born in Edisto Island, South Carolina, U.S..