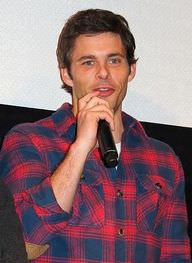 Title
A photo of actor James Marsden during the question and answer portion at the world premiere of Robot and Frank in January 2012.
Author
© Larry Richman
Source
http://commons.wikimedia.org/wiki/File:James_Marsden_at_the_World_Premiere_of_Robot_and_Frank,_January_2012.jpg
License
CC BY-SA 1.0

James Marsden is an American actor. He has also been a Versace model in the past.

He is of English, Scottish, German and French descent. He studied journalism at the Oklahoma State University. He has been married once in the past and he has 3 children.

He had auditioned for a role in the film "Primal Fear", but he lost to Edward Norton. He also turned down the lead role in "54" film, which finally went to actor Ryan Phillippe.

James' birthday is in 231 days

He was born in Stillwater, Oklahoma, U.S..