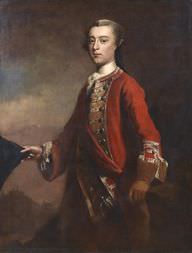 A son of an army officer, James Wolfe joined the British Army at a very young age. He started gaining the attention of his superiors in 1745 with his heroics during the Jacobite Rebellion. Prior to that, he served in the War of the Austrian Succession which lasted from 1740 to 1748.

During the Seven Years' War, he was appointed as the deputy commander of the team that was tasked to seize the Fortress of Louisbourg. He established his name in the history books after leading the British Army to defeat their French counterparts during the infamous Battle of the Plains of Abraham.

His father, Edward Wolfe, was a British army general. His mother was called Henrietta Thompson and grew up with a brother. He was the nephew of distinguished politician, Edward Thompson.

At the age of 23 years, he was made a lieutenant-colonel of the army.

Benjamin West, a famous British-American artist, portrayed him in his work titled “The Death of General Wolfe”.

His bravery earned him many appellations including "The Conqueror of Quebec".

James' birthday is in 147 days

James Wolfe would be 295 years old if he was alive today.

He was born in Westerham, Kent, England, UK.