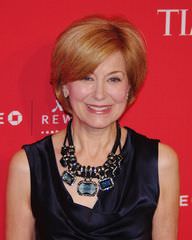 Jane Pauley worked with WISH-TV before joining WMAQ-TV in 1975. The following year, she was hired by NBC to succeed Barbara Walters as the co-host of the morning show “Today”. Between 1980 and 1982, she appeared on “NBC Nightly News”.

She spent her childhood with her parents Mary E. Patterson and Richard Grandison Pauley. She has a sister named Ann who she has described as her idol. In 1980, she became the wife of award-winning cartoonist Garry Trudeau. The couple are blessed with three kids.

In 2002, she won the News & Documentary Emmy Award and received the Daytime Emmy Awards in 2015. She was honored with the same award four years later. Some awards that she has received are the Edward R. Murrow Award, the Walter Cronkite Award for Excellence in Journalism and the Gracie Allen Award.

In 1998, she became a member of the Broadcast and Cable Hall of Fame.

The Jane Pauley Community Health Center borrowed her name in 2009.

She’s said to be suffering from bipolar disorder.

Jane's birthday is in 26 days

Where is Jane from?

She was born in Indianapolis, Indiana, U.S..