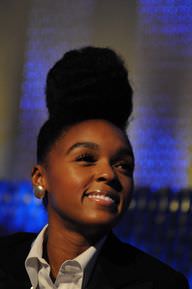 Janelle Monae is a singer and actress whose first full-length studio album The ArchAndroid earned her multiple Grammy Award nominations and produced the hit song Tightrope. She also appeared as a guest vocalist on Fun's hit single We Are Young.

Her career as a professional entertainer began in 2003, with the release of her first EP entitled The Audition. She later featured on feature on two OutKast songs Call the Law and In Your Dreams. She signed to Sean Comb's Bad Boy Records in 2006 and released the EP Metropolis: The Chase Suite (Special Edition), which earned her a Grammy Award nomination for the song Many Moons.

When is Janelle's birthday?

In how many days is Janelle's birthday?

Janelle's birthday is in 300 days

How old is Janelle?