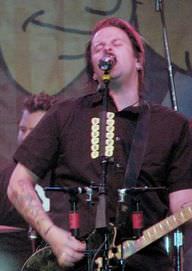 Title
I own OKShowPics.com and took this photograph at a concert in Oklahoma City.
Author
Original uploader was Ib2loud at en.wikipedia. Later version(s) were uploaded by Genisock2 at en.wikipedia.
Source
http://commons.wikimedia.org/wiki/File:JaretReddick.jpg
License
CC-BY-SA-3.0

Jaret Ray Reddick is an American-born singer who lives the life of a songwriter, composer, podcaster, and actor. He is famous for being the lead guitarist and singer for the rock band Bowling for Soup.

Reddick lived with his 5 other siblings in Wichita Falls in Texas. He graduated from the S. H. Rider High School. The singer enjoyed music and nurtured his talents by playing the snare drum and guitar in high school.

The singer joined the rock band Bowling of Soup in 1994 and performed the role of songwriter for them. They produced fantastic music and released songs such as "Cell Mate" in 1996, "Tell Me When to Whoa" in 1998, and "Sorry for Partyin'" in 2009.

The singer also ventured into the movie industry and had roles in works such as "Saving the Tin Man" in 2017, "Never Mind the Buzzcocks" in 2003, and "Phineas and Ferb".

The singer-songwriter is married to Casey Yant as of 2021.

His debut country album “Just Woke Up” was released in 2022.

Jaret's birthday is in 157 days

Where is Jaret from?