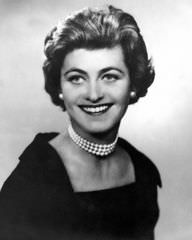 Jean Kennedy Smith was an American diplomat, humanitarian and author whose notoriety was largely attributable to coming from the distinguished Kennedy family. In fact, she holds the distinction of living longer than any of her siblings, some of whom held the most-powerful political positions in the United States.

Her father was Joseph Kennedy Sr., and her mother was his wife, Rose Kennedy.

She is the eighth of nine children born to the couple. Her elder siblings are Joe Kennedy Jr., John Kennedy, Rosemary Kennedy, Kick Kennedy, Eunice Kennedy, Pat Kennedy and Bobby Kennedy, and her little brother was known as Ted Kennedy.

Her elder brother, John Kennedy (aka JFK), served as US President from 1961 to 1963 and is, in fact, one of the most-famous Presidents in American history.

In 1956 she married a businessman by the name of Stephen Edward Smith, whom she remained wedded to 'til his death in 1990.  Together, they had two sons named Stephen Edward Smith and William Kennedy Smith. And they also adopted a couple of daughters named Amanda and Kym Smith.

In 1974 she founded an NGO called Very Special Arts which deals with people with disabilities and since then has spread throughout the world.

She served as the US Ambassador to Ireland from 1993 to 1998.  And although there was some controversy along the way, she is recognized for having helped bring peace to the region.

She was made an honorary citizen of Ireland in 1998.

In 2011, she received a Presidential Medal of Freedom via US President Barack Obama.

In 2016 she published a book called “The Nine of Us: Growing Up Kennedy” about her family.

In 1994 she endured some heavy criticism for advocating that the US grant a visa to a controversial Irish political figure named Gerry Adams.

People born on February 20 fall under the Zodiac sign of Pisces, the Fish. Jean Kennedy Smith is the 1434th most popular Pisces.

In general, Jean Kennedy Smith ranks as the 17848th most popular famous person of all time. “The Famous Birthdays” catalogs over 25,000 famous people, everyone, from actors to actresses to singers to tiktok stars, from serial killers to chefs to scientists to youtubers and more. If you're curious to see who was born on your birthday, you can use our database to find out who, what, where, when and why. You can search by birthday, birthplace, claim to fame or any other information by typing in the search box, or simply browse our site by selecting the month, the day, the horoscope, or any other clickable option.