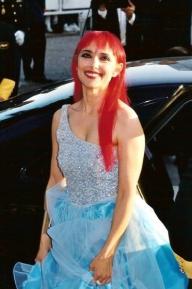 Jeanne Mas is a Spanish-French singer and actress who in terms of her musical skills was considered one of the most-renowned artists in the world during the 1980s.  That is to say that she was popular internationally and until this day is still considered one of the most-versatile entertainers to come out of her homeland during the late 20th century.

The biggest hits of her career are recognized as “Toute Premiere Fois” (1984), “Johnny, Johnny” (1985) and “En Rouge Et Noir” (1986), with the latter two being certified gold and reaching number one on France’s singles’ chart.

It is also said that she is the first lady to have performed at Paris Bercy, with her holding a set of concerts there from 1987 to 1989.

She had actually been in acting before venturing into music, landing her first (uncredited) role in the 1975 version of “The Count of Monte-Cristo” when she was 17 years old.

She also founded another company called The New Divas whose purpose is to promote French fashion.

She has been a vegetarian for decades and in more recent times have taken up veganism.

Jeanne's birthday is in 86 days

Where is Jeanne from?

She was born in Alicante, Spain.

Jeanne Mas is a famous Spanish-French singer and actress, who was born on February 28, 1958. As a person born on this date, Jeanne Mas is listed in our database as the 91st most popular celebrity for the day (February 28) and the 280th most popular for the year (1958).

People born on February 28 fall under the Zodiac sign of Pisces, the Fish. Jeanne Mas is the 2925th most popular Pisces.

Aside from information specific to Jeanne Mas' birthday, Jeanne Mas is the 380th most famous Spanish.

In general, Jeanne Mas ranks as the 36269th most popular famous person, and the 3475th most popular singer of all time. “The Famous Birthdays” catalogs over 40,000 famous people, everyone, from actors to actresses to singers to tiktok stars, from serial killers to chefs to scientists to youtubers and more. If you're curious to see who was born on your birthday, you can use our database to find out who, what, where, when and why. You can search by birthday, birthplace, claim to fame or any other information by typing in the search box, or simply browse our site by selecting the month, the day, the horoscope, or any other clickable option.