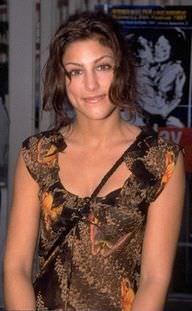 Title
Jennifer Esposito At the Premier of the film 'Sunday'.
Author
David of Earth (NY)
Source
http://commons.wikimedia.org/wiki/File:Jennifer_Esposito.jpg
License
CC BY 2.0

Jennifer Esposito is an American author, model, and actress. She is best known for appearing for 2 seasons on the television series “Spin City”.

Jennifer’s television debut was on the television show “Law & Order”, She then went on to appear in the teen horror film “I Still Know What You Did Last Summer” and “The Summer of Sam”. In 2004, she co-starred in the Academy Award winning film “Crash”.

Jennifer has had a number of high profile relationships including being married to actor Bradley Cooper for less than 6 months. She is presently engaged to British model/actor, Louis Dowler.

Jennifer is very public about her battle with celiac disease and has written a bestseller called “Jennifer’s Way”, which describes her struggles.

Jennifer's birthday is in 66 days

Where is Jennifer from?