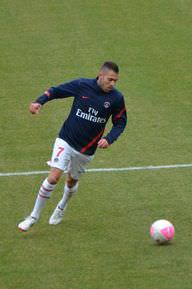 Jérémy Ménez is a French professional soccer player who joined the France national football team in 2010. He began his senior club career in 2004 with Sochaux. He later played for teams such as Monaco and Roma before joining A.C. Milan in 2014.

Throughout his career, he has played for France at all levels, including for the France national under-17 football team that won the 2004 UEFA European Under 17 Football Championship.

In 2010, while driving out of the Stadio Olimpico in Rome, Italy, he was attacked by a group of irate fans who smashed his windshield.

Jérémy's birthday is in 214 days

Where is Jérémy from?

He was born in Longjumeau, France.

What is Jérémy Ménez's height?