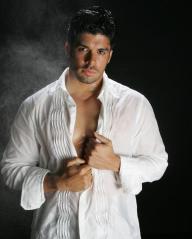 His father Edwin was a director for Los Barones Trio and guitarist and his mother Dominga is a singer. His sister Saned, and his brothers Jose and Ito are all noted musicians.

He has had children named Lizzie, Celina and Gerardo from his marriage to Seyla Rivera.

In 1992, Rivera won two Singer of the Year awards at the Premio Lo Nuestro Awards and three Crystal Awards from Sony Records.

His 2000 tribute album, Cantando A Mi Idolo earned him a nomination at the Latin Grammys.

In 2018, he fell and broke his leg during a concert in Milagro, Ecuador.

He became one of the four judges of the Puerto Rican version of the American Idol.

Jerry's birthday is in 304 days

Where is Jerry from?

He was born in Santurce, Puerto Rico.