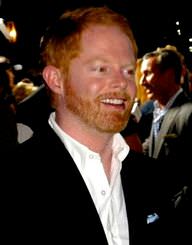 Jesse Tyler Ferguson is a renowned American actor, who is most popular for his appearance in the sitcom, "Modern Family", where he played the role of "Mitchell Pritchett", which gained him massive accolades and awards.

His parents are mother, Anne Ferguson and father, Robert Ferguson. He siblings include; Kelly and Ben Ferguson. He got married to Justin Mikita - who is a lawyer - in 2013, after having dated for two years.

He picked up the accolade in the category of "Outstanding Ensemble Performance" at the Drama Desk Award in 2005.

Ferguson earned a nomination for the "Outstanding Supporting Actor in a Comedy Series" at the 2013 Primetime Emmy Awards.

He was awarded the "Outstanding Solo Performance" award at the 2013 Drama Desk Award.

He is noted to have owned a dog named "Leaf".

He was named after his grandmother, "Jessie Uppercue Ferguson".

As an actor, you just want to work, and then you just want to be on a show or have a job that you love, and you hope that job will last - those things have happened. To have that platform to then talk about something that is very personal to me like marriage equality, it feels like a gift. I try and really respect that voice and not abuse it.Jesse Tyler Ferguson

My dad has always been very proud of me but I think I have exceeded his expectations. When I told him I wanted to be an actor and moved to New York City, I think he assumed I would be playing the guitar on the subway and collecting spare change in my guitar case. The fact that I'm not doing that means that I'm a huge success.Jesse Tyler Ferguson

Something I didn't even know was on my bucket list has been achieved. I have cooked Thanksgiving dinner with Martha Stewart. I vow to follow the gospel of her teachings and do my very best in the remarkably less glamorous kitchen of my own home... without the luxury of magically appearing prep bowls filled by a staff of sous chefs.Jesse Tyler Ferguson

The definition of marriage cannot be disputed. It's right there in black and white and it's been the same since the start of Wikipedia.Jesse Tyler Ferguson

Well, my personal mission statement is that we want marriage equality in all 50 states. We want it not to be a state-by-state issue. We don't want it to be something the majority is voting on. I don't think the civil rights of any minority should be in the hands of any majority.Jesse Tyler Ferguson

Jesse's birthday is in 327 days

Where is Jesse from?

He was born in Missoula, Montana, U.S..

People born on October 22 fall under the Zodiac sign of Libra, the Scales. Jesse Tyler Ferguson is the 1214th most popular Libra.

In general, Jesse Tyler Ferguson ranks as the 13524th most popular famous person, and the 1753rd most popular actor of all time. “The Famous Birthdays” catalogs over 40,000 famous people, everyone, from actors to actresses to singers to tiktok stars, from serial killers to chefs to scientists to youtubers and more. If you're curious to see who was born on your birthday, you can use our database to find out who, what, where, when and why. You can search by birthday, birthplace, claim to fame or any other information by typing in the search box, or simply browse our site by selecting the month, the day, the horoscope, or any other clickable option.