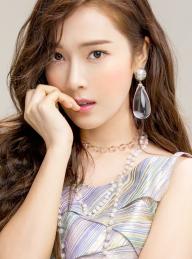 Title
Jessica as the cover-girl for the March 2018 issue of CLEO Thailand.
Author
CLEO Thailand
Source
https://en.wikipedia.org/wiki/File:Jessica_on_the_CLEO_Thailand_magazine_(cropped).png
License
CC BY 3.0

Jessica Jung is an American-Korean actress, singer, model, and businesswoman. She is widely-recognized as being a former member of the South Korean pop group “Girls Generation”.

Jessica has a fashion line called “Blanc and Eclare”. Jessica trained for 7 years before making her big break as being cast as a member of the all-girls group, “Girls’ Generation”. Jessica and her sister appeared together on their own short-lived television series called, “Jessica and Krystal”. Jessica has been hard at work on her solo debut album which has been in the works for several years.

Jessica has a sister named Krystal that is also a singer and actress. Jessica’s “Girls Generation” die-hard fans are known as ‘Sones’.

Jessica's birthday is in 138 days

Where is Jessica from?