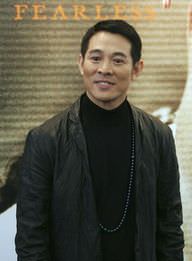 Jet Li practiced wushu from as early as eight years old. He won fifteen gold medals at the young age of fifteen in Chinese wushu tournaments.

Now a known actor, Jet Li rose to fame through his work as a star in martial arts action movies. Some of his famous early films include the Shaolin Temple trilogy, Once Upon a Time in China, and Fist of Legend. He eventually moved to America and has been in films like Unleashed, The Forbidden Kingdom, and The Expendables.

Bruce Lee was very famous. I watched his movies and he is amazing. He is a martial arts master, his philosophy, his movement, both physically and mentally, were very strong.Jet Li

Every President that went to China, I would meet them and have dinner and talk about the past and the future. That was in the '70s.Jet Li

I am so happy because I want more people to like martial arts movie not just martial arts audience. Even martial arts can be used in comedy, in drama, in horror movies, in different kinds of movies.Jet Li

I believe the world is one big family, and we need to help each other.Jet Li

I didn't go to normal children school. I went to sports school when I was 8. So I studied martial arts.Jet Li

I knew nothing about martial arts. The coach told me I was talented with learning martial arts, and put me in a school. Three years later I got my first championship in China.Jet Li

I never stopped studying Buddhism. In the past few years, in between movies, I do a retreat.Jet Li

I spend more time learning about Buddhism than English, which is why my English today is still bad.Jet Li

I want to thank my mum, my daddy, my coach, my teacher, everybody in my life.Jet Li

I've been learning martial arts since I was 8 years old.Jet Li

In the States, you can buy Chinese food. In Beijing you can buy hamburger. It's very close. Now I feel the world become a big family, like a really big family. You have many neighbors. Not like before, two countries are far away.Jet Li

My wife is the boss at home, and my daughters are the bosses. I am just the worker. We are a very warm family and very happy.Jet Li

My wife wanted my children to have some Chinese culture and education. She believes the children need to learn two languages and two cultures.Jet Li

This film 'Hero' talks about the peace of Chinese people.Jet Li

When I was 8 years old, I knew nothing about martial arts. The coach told me I was talented with learning martial arts, and put me in a school.Jet Li

Wushu is a move in Chinese, a physical move. An attack. Wushu is like an art.Jet Li

Zhang Yimou tried to use martial arts to talk about Chinese culture, Chinese people. What do they think, what do they want and what do they hope.Jet Li

Where is Jet from?

He was born in Beijing, China.

What is Jet Li's height?