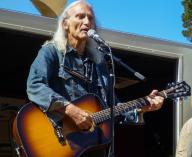 Renowned for his distinctive style of music that blends rock, folk, country and blues, “... Jimmie Dale Gilmore is one of those rare visitors you wish would never leave,” the Seattle Times wrote.

The son of a lead guitarist, he was born in Amarillo, Texas. The musical style of Hank Williams had a career-defining influence on him growing up.

His debut solo album “Fair and Square" came out in 1988. He collaborated with country musician Willie Nelson to create “Crazy” as an addition to the “Red Hot + Country” AIDS benefit album. The 1995 drama film “Kicking and Screaming” featured his “Braver Newer World” song. He got into a bit of acting and starred as himself in the film “The Thing Called Love.” He has made guest appearances on shows such as “The Late Show with David Letterman” and “A Prairie Home Companion.”

Three of his albums, “Spinning Around the Sun,” “Braver Newer World” and “Come on Back,” have earned him Grammy Award nominations.

Title
Photo of Jimmie Dale Gilmore and Colin Gilmore at Deep Eddy Pool in Austin Texas, June 2004. Photo by Steve Hopson. More information about photographer and other images at
Author
The original uploader was SteveHopson at English Wikipedia
Source
http://commons.wikimedia.org/wiki/File:JimmieDaleandColinGilmore.jpg
License
CC BY 2.5

Where is Jimmie Dale Gilmore from?

He was born in Amarillo, Texas U.S..