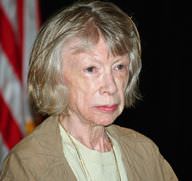 Joan Didion began her career as a writer in the 1960s following her first-place win in an essay contest sponsored by Vogue. The prize came with a research assistant position at Vogue, where she eventually became the associate feature editor. Her debut novel, “Run, River” was published while she was still with the magazine. Her significant works include “Slouching Towards Bethlehem”, “Play It as It Lays” and “The Year of Magical Thinking”, which she wrote in response to the passing of her husband.

Her parents were Eduene and Frank Reese. She married writer and literary critic, John Gregory Dune in 1964. They adopted a daughter, Quintana Roo Dunne in 1966. John died in 2003 from a heart attack and Quintana followed two years later from acute pancreatitis.

She was honored with the National Book Award for Nonfiction. She was a Pulitzer Prize finalist for her book, “The Year of the Magical Thinking”.

Joan Didion’s death was a result of complications of Parkinson's disease. The revered essayist died at home at the age of 87.

She is the subject of the documentary titled “The Center Will Not Hold”.

Joan's birthday is in 5 days

How old was Joan when she died?

Where was Joan from?

She was born in Sacramento, California, U.S..