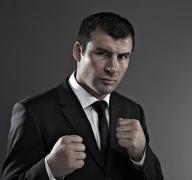 He is a retired Welsh boxer, who is noted to have been active in the sport between 1993 and 2008. Due to his outstanding performances, Joe Calzaghe went ahead to hold championships in two weight classes.

After holding the WBO title for more than ten years and having defended the same belt against twenty boxers, he earned himself the record of the longest-reigning super-middleweight world champion in all of boxing's history.

He also set a record for being the first Ring champion of the super-middleweight class and also the first boxer to ever unify the three major titles – WBA, WBC, and WBO.

Calzaghe fought in 46 fights, winning all his fights – he eventually retired in 2008 without a single loss.

His father is the late Italian-born Welsh boxing trainer, Enzo Calzaghe. His mother, Jackie Calzaghe worked in 20th Century Fox's offices as a secretary. His siblings include; Sonia and Melissa Calzaghe.

He was married to Mandy Davies between 1994 and 2005. He is noted to have been romantically involved with Kristina Rhianoff and Jo-Emma Larvin. His children include; Joe and Connor Calzaghe.

He won the British super-middleweight title in 1995.

He won the WBO super-middleweight title in 1997.

He received the WBA (Super) and WBC super-middleweight titles in 2007.

Calzaghe used to play football while growing up.

Where is Joe from?

He was born in Hammersmith, London, England, UK.

What is Joe Calzaghe's height?

People born on March 23 fall under the Zodiac sign of Aries, the Ram. Joe Calzaghe is the 2619th most popular Aries.

Aside from information specific to Joe Calzaghe's birthday, Joe Calzaghe is the 114th most famous Welsh and ranks 21st in famous people born in Hammersmith, London, England, UK.

In general, Joe Calzaghe ranks as the 33600th most popular famous person, and the 114th most popular boxer of all time. “The Famous Birthdays” catalogs over 40,000 famous people, everyone, from actors to actresses to singers to tiktok stars, from serial killers to chefs to scientists to youtubers and more. If you're curious to see who was born on your birthday, you can use our database to find out who, what, where, when and why. You can search by birthday, birthplace, claim to fame or any other information by typing in the search box, or simply browse our site by selecting the month, the day, the horoscope, or any other clickable option.