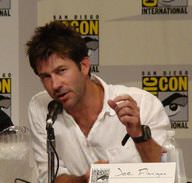 He is an American who has gained the reputation as a great actor and writer.

When he was born by Nancy, he was given the name Joseph Dunnigan III. As soon as he was born, his mother separated from his father. His stepfather came into the picture, adopted him and gave him his surname, Flanigan. He got into boarding school when he was just a teenager. He attended the University of Colorado where he studied history. In 1996, the painter and actress Katherine Kousi became his wife and they had three children before going their separate ways in 2014.

He worked for President George H.W. Bush when he was done with school, then he went on to write for publications in New York. In 1994, he starred in “Family Album” where he was cast as Lionel Thayer”. The following year, he was in “Deadline for Murder: From the Files of Edna Buchanan” where he played the role of Scott Cameron. Other shows he has been in include “Tell Me No Secrets”, “The Secret Lives of Wives” and “Women’s Murder Club”.

Joe's birthday is in 97 days

Where is Joe from?