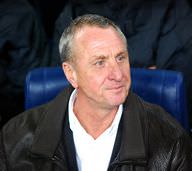 Three-time Ballon d’Or winner, Johan Cruyff was best known for his creative style of play on the pitch. In more recent times, he is regarded as one of the best footballers and managers in the history of the sport. He passed away in 2015, aged 68, from lung cancer.

The Dutch national was born in Amsterdam and lived close to the stadium owned by the Ajax Football Club, which would later be his first football club. His mother remarried another man, who worked for Ajax and would play a key role in Cruyff’s football career.

Cruyff joined Ajax when he was 10 years old and made his professional debut for the senior team in 1964. He later played for Barcelona, the Los Angeles Aztecs, Washington Diplomats, Levante, and Feyenoord. In his later life, he managed Ajax, Barcelona, and Catalonia before retiring in 2013.

He represented the Netherlands appearing 48 times and scored 33 goals. His goal-to-caps ratio is testament to how influential he was in his country’s football fortunes.

As a manager, he developed a popular kind of football philosophy that came to be called Total Football. Cruyff was part of wave of very skilled Dutch footballers that burst on to the scene in the early 1970s.

The attacking midfielder steered his nation to the final of the 1974 FIFA World Cup held in West Germany. The Dutch narrowly missed out on the title following their defeat at the hand of host nation West Germany. Cruyff was undoubtedly the standout player of the tournament as he received the Golden Ball.

Two years after the 1974 World Cup, Cruyff was involved in the UEFA Euro 1976 tournament and helped the Netherlands finish third.

His close to a decade stay in Ajax saw him win a whopping eight Eredivisie titles. The Dutch international also won a hatrick of European Cups.

With Barcelona, he won the La Liga title in the 1973/74 season. Four years later, he got his hands on the Copa del Rey title.

The International Federation of Football History & Statistics voted him the best European footballer of the 20th Century. The Dutch maestro finished at number 2 on the list of the World Player of the Century, coming in behind Brazilian legend Pelé.

Johan Cruyff's transfer to Spanish giants FC Barcelona at the time made him the most expensive player in the world.

He and his family went through the unpleasant ordeal of an attempted kidnaping incident. The footballer was so shocked that he withdrew from the 1978 UEFA Euro tournament.

Johan Cruyff's birthday is in 210 days

How old was Johan Cruyff when he died?

Johan Cruyff would be 75 years old if he was alive today.

Where was Johan Cruyff from?

He was born in Amsterdam, Netherlands.

What was Johan Cruyff's height?