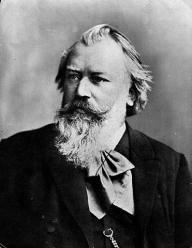 Johannes Brahms was a renowned German composer/pianist who joins Johann Sebastian Bach and Ludwig van Beethoven in the unofficial grouping called the “Three Bs” when it comes to mastery in classical music. Brahms was a master of the counterpoint, a trait he shares with Bach, which is a musical term referring to voices that are interdependent harmonically but independent in rhythm and contour. His works are heavily influenced by Baroque and Classical masters and he was also notable for never composing any operas. He was also known to be a perfectionist when it came to his works, often destroying them if it were not up to his standards.

Some of his most notable works include the Brahms's Lullaby (commonly known as the Cradle Song), the Hungarian Dances, the Liebeslieder Waltzes, and the Variations on a Theme by Haydn.

Johannes' birthday is in 214 days

How old was Johannes when he died?

Johannes Brahms would be 189 years old if he was alive today.

Where was Johannes from?

He was born in Hamburg, Germany.